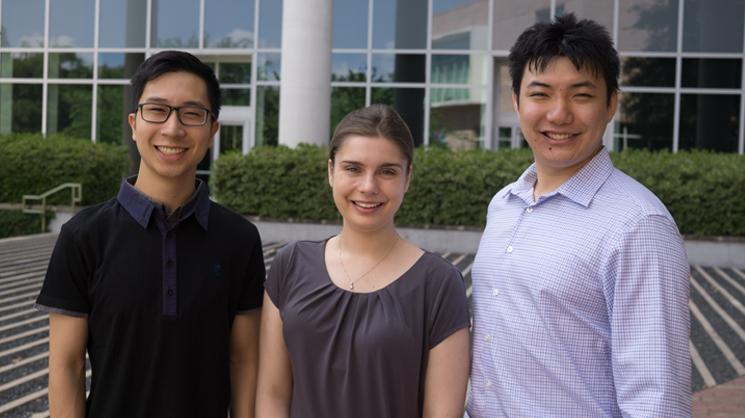 The NSF’s Graduate Research Fellowship Program (GRFP), one of the oldest programs of its kind, is highly competitive as only 2,000 students out of more than 12,000 applicants from across the U.S. were selected this year. Students were chosen for their high-potential research-based projects.

The Rice graduate students will lead investigations in the engineering of genetically encoded nanotherapeutics, a wireless magnetoelectric device for neurotherapy, and a gut-on-a-chip model to fight intestinal disease.

Jeron Chen is a second-year doctoral student in chemical and biomolecular engineering, who conducts research in Associate Professor Junghae Suh’s laboratory. He will create tunable protease-activatable virus (PAV) vectors that target and become active at sites in the body with elevated metalloproteinases, which are a particular family of enzymes linked to cancer, cardiovascular and neurological diseases.

“When PAVs encounter the right protease the viruses unlock, bind to the cells and deliver payloads that either kill diseased cells or deliver therapeutic genes that can fix them. My goal is to combine computational and optimization methods to establish sequence-based rules for greater tumor targeting and enhanced payload delivery,” said Jeron.

Jeron hopes his strategy will serve as a blueprint for faster and easier design of desired PAVs for specific disease applications with distinct elevated protease profiles.

Jeron has a B.S. in chemical and biomolecular engineering from Johns Hopkins University. Throughout most of his undergraduate studies, he worked on several projects in Professor Denis Wirtz’s laboratory to evaluate and measure intricate cellular processes using 2-D and 3-D matrices.

Josh Chen conducts research in Assistant Professor Jacob Robinson’s laboratory. He came to Rice from the University of California, Berkeley and will begin his second year of doctoral studies in bioengineering this fall. Josh will use his NSF fellowship to build a miniaturized wireless magnetoelectric device that delivers controllable electrical stimulation to specific neural circuits in the brain, spine, or peripheral nerves.

“Bioelectronic medicine has the potential to revolutionize health care, particularly when traditional drugs are no longer effective or have severe side effects. Electrical stimulation can be applied to nerves or organs to regulate the body’s chemical responses for the treatment of a variety of diseases such as arthritis, hypertension, and diabetes,” Josh said.

Josh says the tiny device isn’t limited to electrical stimulation. “It can also be used as a wireless energy harvester within the body to power other implants, where its main advantages come from its scalability and its ability to maintain high voltages at tiny sizes.”

While earning his B.S. in bioengineering, Josh worked in the laboratories of Professor Michel Maharbiz and Professor Liwei Lin at Berkeley developing an electronic smart bandage for pressure ulcer detection and 3-D microfluidic devices for disease diagnosis.

Celiac disease, an autoimmune disorder triggered by the ingestion of gluten, damages millions of finger-like villi that line the small intestine. “Shortened villi decrease the surface area of the intestine, which can have a serious effect on nutrient and drug absorption,” said Sarah Hewes, a second-year doctoral student in bioengineering who conducts research in Professor Jane Grande-Allen’s laboratory.

Because people with celiac disease can absorb drugs at different concentrations, research is needed for more informed dosing. “In vitro models of celiac disease will help evaluate drug dosage, benefits and side effects. For this project, I will engineer a perfusable, vascularized model of the small intestine to more accurately mimic the shape of villi and enable drug permeability studies in diseased and healthy conditions.”

The system could also pave the way for the development of lab-grown small intestine tissues and create an avenue to connect models of multiple organ systems and study their interactions and the progression of disease.

Sarah has a B.S. in materials science and engineering from Johns Hopkins University where she spent four years working in Professor Peter Searson’s laboratory to establish cell printing projects to study endothelial cell morphology and the building of cellular microenvironments.