The honor recognizes the Rice bioengineer for his “outstanding contributions in the science and technology of controlled release. 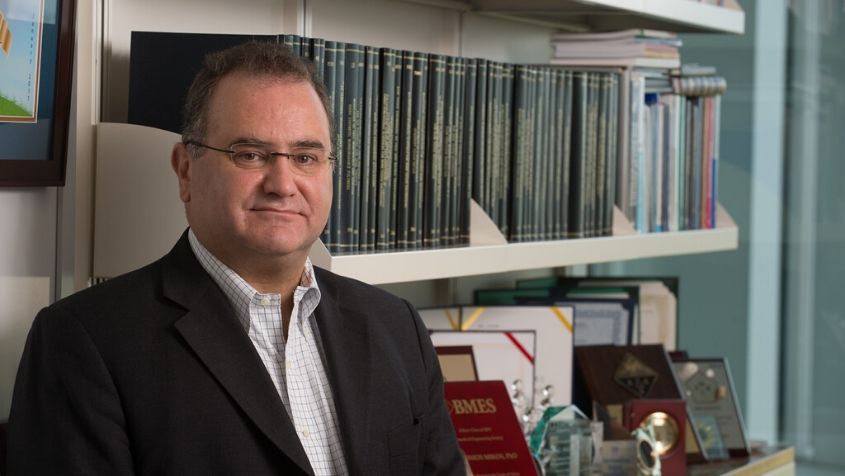 Antonios G. Mikos, Louis Calder Professor of Bioengineering and of Chemical and Biomolecular Engineering at Rice University, has received the 2020 Founders Award of the Controlled Release Society (CRS).

The honor recognizes Mikos for his “outstanding contributions in the science and technology of controlled release.” Controlled release includes various methods for delivering drugs and other substances at a desired rate for a specified period of time.

Mikos’ research focuses on the synthesis, processing, and evaluation of biomaterials for use as scaffolds in tissue engineering, carriers for controlled drug delivery, non-viral vectors for gene therapy and as platforms for disease modeling. His work has led to the development of orthopedic, dental, cardiovascular, neurologic and ophthalmologic biomaterials.

In 2016, when Mikos was elected to the Academy of Athens, Greece’s national academy and highest research establishment, the announcement of his induction read, in part:

“Recognizing the potential for biologically active factors to promote tissue regeneration, Mikos made landmark innovations in the controlled release and delivery of therapeutics, ranging from nucleic acids to growth factors, which he and many others have leveraged to promote regeneration of tissues and complex tissue interfaces.”

Mikos earned his Ph.D. in chemical engineering from Purdue in 1988. He was a postdoctoral researcher at MIT and the Harvard Medical School before joining the Rice faculty in 1992. He is director of the Center for Engineering Complex Tissues, the Center for Excellence in Tissue Engineering, and the J.W. Cox Laboratory for Biomedical Engineering at Rice.

Mikos will formally receive the award at the CRS 2020 Annual Meeting and Exposition in Las Vegas, held June 27-July 1, where he will deliver the “Founders Award Lecture.