Rice bioengineer Antonios G. Mikos has been awarded an honorary doctorate from the School of Dentistry at the Aristotle University of Thessaloniki. 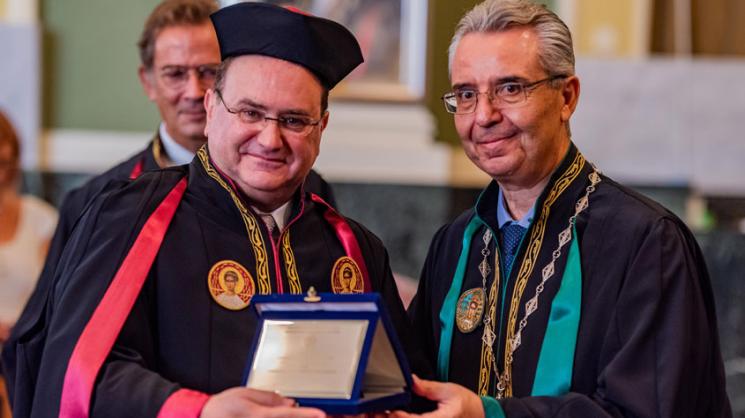 Antonios G. Mikos, Louis Calder Professor of Bioengineering and of Chemical and Biomolecular Engineering at Rice University, has been awarded an honorary doctorate from the School of Dentistry of his undergraduate alma mater, Aristotle University of Thessaloniki.

Mikos graduated in chemical engineering from the university, the largest in Greece, in 1983, and in September attended the award ceremony, where he gave a speech titled “Tissue Regeneration by Means of Biomaterials.”

Mikos’ research focuses on the synthesis, processing, and evaluation of biomaterials for use as scaffolds in tissue engineering, carriers for controlled drug delivery, non-viral vectors for gene therapy and as platforms for disease modeling. His work has led to development of orthopedic, dental, cardiovascular, neurologic and ophthalmologic biomaterials.

Mikos earned his Ph.D. in chemical engineering from Purdue in 1988. He was a postdoctoral researcher at MIT and the Harvard Medical School before joining the Rice faculty in 1992. He is director of the Center for Engineering Complex Tissues, the Center for Excellence in Tissue Engineering, and the J.W. Cox Laboratory for Biomedical Engineering.