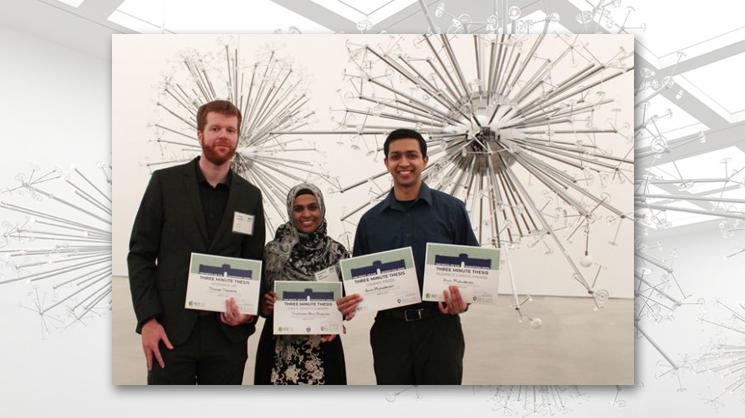 For his presentation, “The Social Network of Stem Cells,” he also won the $500 Alumni Choice Award, which was voted on by Rice alumni in the audience. Mahadevan’s adviser is Amina Qutub ’99, assistant professor of bioengineering.

Mahadevan competed with nine other graduate students, all of whom had three minutes to explain their research thesis and its significance to a non-specialist audience. The 3MT, developed by the University of Queensland, is intended to cultivate students’ academic, presentation and research communication skills. It replaces Rice’s previous annual thesis competition in which graduate students were allotted 90 seconds to talk about their work.

A panel of five judges that included Rice faculty, administrators and alumni evaluated the 3MT presentations for comprehension, content, engagement and communication.

Chemistry graduate student Thasneem Banu Frousnoon won the Graduate Student Association’s Audience’s Choice Award, a $500 travel grant, based on the votes of graduate students in the audience. Her presentation was titled “New Approach to Characterizing Oxidosqualene Cyclases in Secondary Metabolism.” Her adviser is Seiichi Matsuda, dean of graduate and postdoctoral studies and the E. Dell Butcher Professor of Chemistry.

The 10 students who gave presentations were selected during preliminary rounds in February.

Moderator for the 3MT program was bioengineering graduate student Gisele Calderon, who won the Audience Choice Award at the 2016 90-Second Thesis Competition, in which she placed third.

Mahadevan’s grand prize qualified him to represent Rice at the 3MT southern regional competition next February. The Office of Graduate and Postdoctoral Studies will cover his travel expenses as part of the grand prize.