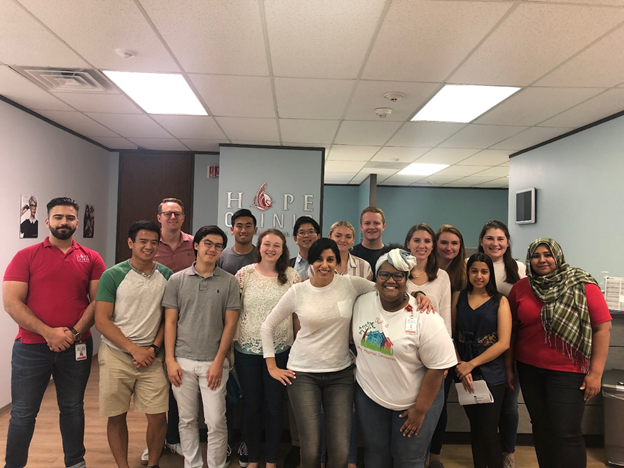 It’s been almost a full month since my triumphant return to America and about three weeks since the start of classes. It was whirlwind the first week meeting so many new people and playing musical chairs with all the elective classes to figure out which ones I enjoyed the best. I finally settled on taking a professional development elective to improve my workplace communication and networking and a neural processing class. After my classes and groups were established, we began digging into what we would be doing for the rest of the semester. We have gotten to meet a lot of new faces like the people that run the Hope Clinic and some friendly Australians from the Peter MacCallum cancer center in Melbourne. At the hope clinic we got to sit down and discuss the applications of global health in America. We went over the issues of medical accessibility in America and how the Hope Clinic works towards addressing it. With the people from the Peter MacCallum center we discussed their innovative solutions for using VR to address education of radiotherapy procedures in pediatric populations. We also got to speak a lot about what radiotherapy is and how it is approached for the pediatric population. This was fantastic because the global project that I am working on is related to pediatric radiotherapy.

For my projects, I am working in a group to develop a device for pediatric radiotherapy in Brazil to help keep children still during imaging and treatment. We have been working hard to set up meetings with experts and stakeholders to build our informational base and resources for the project. I am also on a team working locally with CDI to identify and develop a need in the lung cancer sector. We then met with the head of thoracic surgery at MD Anderson to discuss needs and set up observations. So far, we have gotten watch to two operations, but one was cut short because they began by testing biopsy samples. The biopsy sample came back negative for cancer and being able to be in the room and see a patient be told their cancer was gone was fantastic. I also got to observe the Rice football team at the game against the university of Texas and that was a rough one. We ended up leaving at the third quarter because the thought of food was too enticing, and the game was just spiraling downwards for us. We watched the end of the game from a wing place and Rice ended scoring 13 points by the end, so I call that a success.

I’m still getting settled in at Houston but the first thing I set out to do was eat all the food I could. The first food big adventure was to try what my fellow classmate described as the best Peking duck in Houston; which was so good, I forgot to take pictures. But after we walked around Chinatown and found a quaint ice cream shop that was selling a variety of different flavors. We ended trying taro ice cream decorated with different topping and it was delicious. The next place on my radar was a hot dog stand that only opened on weekends called Yo Yo’s. I kept putting it off because the line was always about 50 people long and I just couldn’t imagine a hot dog being worth it. Well I was wrong. After waiting 45 minutes I got to the front of line where the guy running the stand said, “It’ll change your life” and he was right. The hotdog just consisted of a bun, hot dog, caramelized onions, crunchy bits, and two or three types of sauce. I’ll be honest, it didn’t look pretty but it sure was tasty.