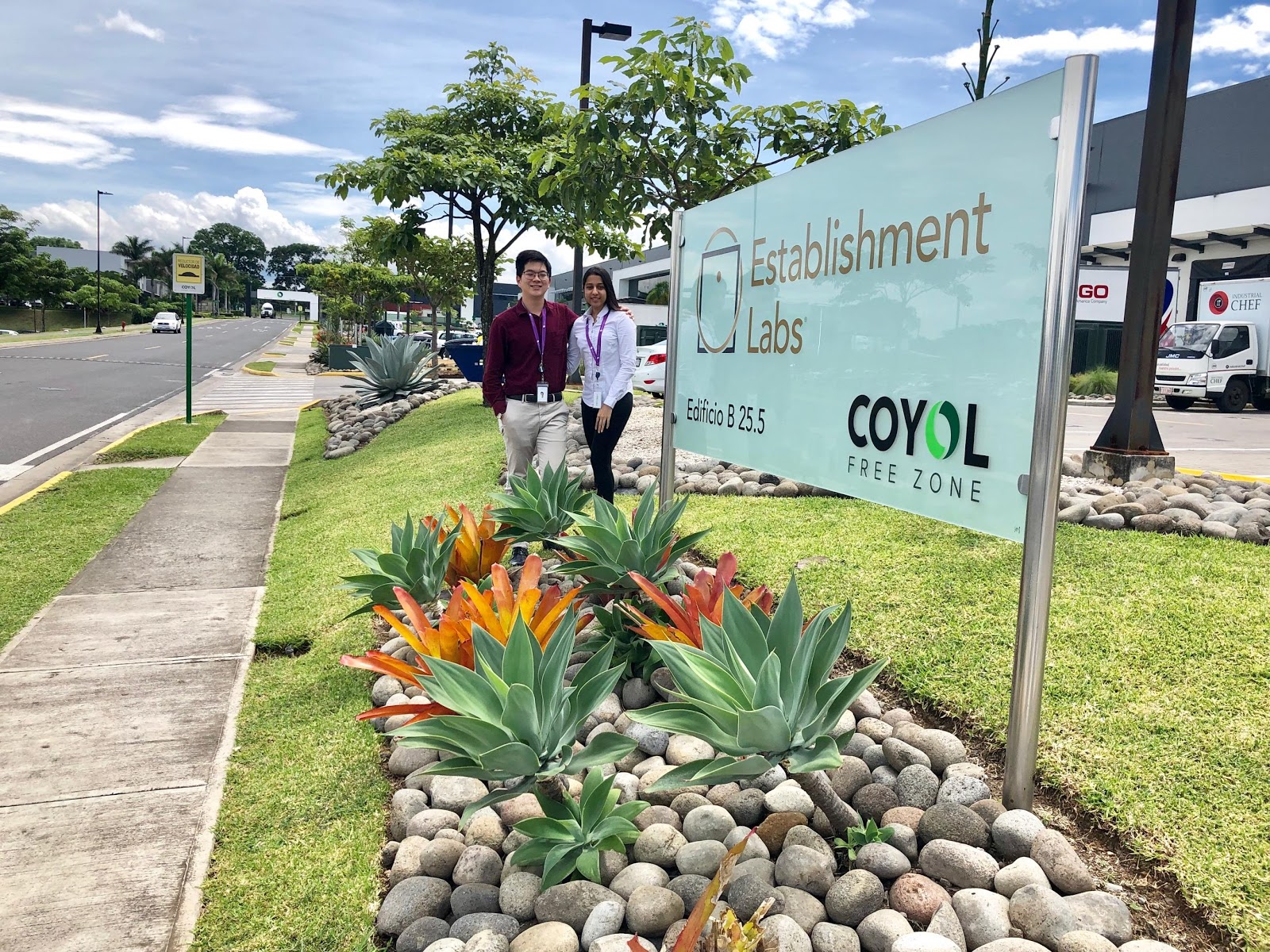 As the only non-engineer in the RDI department at Establishment Labs, I have had the opportunity to learn and contribute in unique ways.

As I write this post, I am surprised that I have made it to the halfway mark of my internship at Establishment Labs. Not because I thought I wouldn’t survive a highly regulated and fast-paced work environment, but because most of my co-workers still think I am an engineer.

Truth is, I went to design school and graduated with a major in product design before joining this engineering masters program. Why did I make that uncommon transition, you may ask? It’s because design and engineering have been inextricably linked as fields for a very long time. While one prescribes a solution, the other makes the solution possible. For instance, a rain jacket would be useless if it looked great and was easy to wear but didn’t actually repel water. So designers, to some degree, have to understand engineering to make reasonable claims.

So as the only non-engineer in the research, development and innovation (RDI) department at Establishment Labs, I have had the opportunity to learn and contribute in unique ways. The company primarily makes silicone-filled breast and body shaping implants but is expanding their product portfolio to include other diagnostic and simulation devices to assist plastic surgeons. I am working with the Divina team and my role is to identify and resolve software usability issues. The process involves competitive testing, task analysis, heuristic evaluation and prototyping. The goal is to make the user interface as simple and intuitive as possible.

During team meetings, it is really common for the software engineers and me to constantly debate the placement of buttons, the hierarchy of information, even aesthetics and other things under the umbrella of design. These back and forth debates came rooted from different perspectives - theirs were strongly from logical reasoning and factual data, and mine, a lot of the times were simply from experience, watching users interact with the product, talking to them and trying to understand their motives. They would argue that a button should be on the left because users read left to right, and I would argue that it feels awkward for users because they write with their right hand. Both sides of the discussion were productive because ultimately humans are both logical and emotional.

When I’m not in one of these team meetings or conducting user tests, Erik and I are attending review and training sessions with different departments at the company to understand how they function. We had a hands-on session on the implant dipping and sealing process and also learnt the regulatory compliance requirements for medical devices. Erik and I took all the aspects of this internship very seriously, including our golf cart and bike training sessions, photographs for our employee ID cards and the annual snow cone (or granizado, as the Ticos call it) office party.

It wasn’t just the Establishment Labs employees’ that mistook me for an engineer. Even during our clinical rotation sessions on Friday, the doctors that Hannah and I were shadowing would oft ask – “why did you two decide to become engineers and solve problems in the field of medicine?” At that point, I would only respond to the second part of their question and talk about what motivated me to pursue research in healthcare because I didn’t want to puzzle them with my journey from design to engineering.

In medicine, experience is at the heart of learning. So for the first 4-week rotation, Hannah and I went to radiotherapy first and then to gastroenterology. In radiotherapy, we watched most of the external beam radiation procedures from the control room, and were occasionally permitted to enter the treatment room between procedures. We found several needs around the positioning and immobilization equipment that radiotherapists use to align treatment fields and focussed our observation in that area.

Gastroenterology was a whole new experience and this time we were observing in the operation room. We saw an early gastric tumour resected from the stomach, a polyp extracted from the rectal canal, an endoscopic treatment of oesophageal achalasia and even an endoscopic ultrasound. These procedures were painstakingly documented on mind maps and every mind map would generate tens of needs statements. At the end of the 4-week rotation, we began to cluster the needs to find commonalities that transcend different needs.

Before I conclude this seriously lengthy blog post, I want to say that this summer has been one of many firsts. The first time I visited a volcano, my first 4th of July celebration and the first time I ever cooked anything (which so far has been fairly successful).

Learn more about our one-year, full-time Master of Bioengineering in Global Medical Innovation.