The department paid tribute to its graduates on May 15 with a virtual ceremony open to family, friends and Rice faculty. 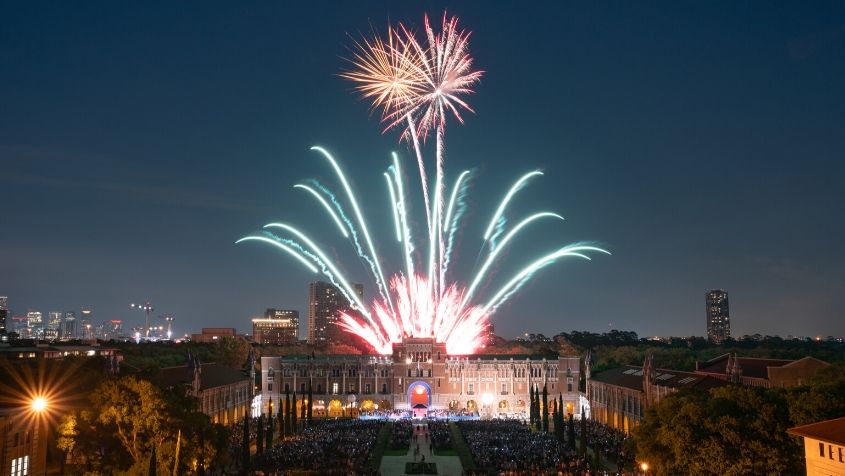 Creativity and collaboration are at the heart of the bioengineering curriculum, and those values were on display during the Rice Bioengineering Department’s virtual celebration for graduating seniors. The department paid tribute to its graduates on May 15 with a virtual ceremony open to family, friends and Rice faculty. The celebration took place one day before the university-wide commencement ceremonies.

Hosted virtually via Zoom Webinar, 100 attendees joined the webinar to honor the students. Department chair Jane Grande-Allen delivered opening remarks and presented the 2020 Bioengineering Department Teaching Award to Bilal Ghosn, bioengineering lecturer and prior chair of the department’s Undergraduate Affairs Committee. The winner of this award is determined by a poll of bioengineering majors.

Ghosn and Sabia Abidi, bioengineering lecturer, announced the winners of the annual department undergraduate awards. After the awards were presented, each graduating undergraduate’s name was read by Grande-Allen and, if available, their video was highlighted for attendees to see.

After the faculty organized portion of the event, seniors delivered their own remarks and a brief presentation on the cohorts’ next steps as Rice bioengineers. Kevin Peng, 2019-20 president of the Rice Biomedical Engineering Society, delivered a speech highlighting the mentorship and strong sense of community he found at Rice, and which led him to remain in the major.

“Most of all, I wanted to thank my peers. You guys are the reason I stuck with BIOE. My peers are some of the most intelligent, high-achieving individuals that I’ve met at Rice,” Peng concluded.

The slideshow presentation by Akshayalakshmi Santhanaraj highlighted the bright futures she and her peers have  worked hard to achieve. About 53 percent of the graduates will attend medical or graduate school in the fall, with 47 percent entering industry, taking a gap year or devoting a year of service to such organizations as the Peace Corp. and Teach for America.

My peers are some of the most intelligent, high-achieving individuals that I’ve met at Rice.

Peng surprised attendees by closing the celebration with a video message created for Ghosn on behalf of the entire cohort. Despite social distancing and students spread across the globe, several seniors-- including Peng, Christie Ballew, Dennis, Gartenberg, Lu, and Brenda Venegas--filmed a pre-recorded video message for Ghosn, editing together messages of gratitude and hope, and humorous reflections on the impact of Ghosn’s teaching and mentorship.

Despite the pandemic and the inconveniences it imposed, the 2020 graduating class celebrated their journey one last time.