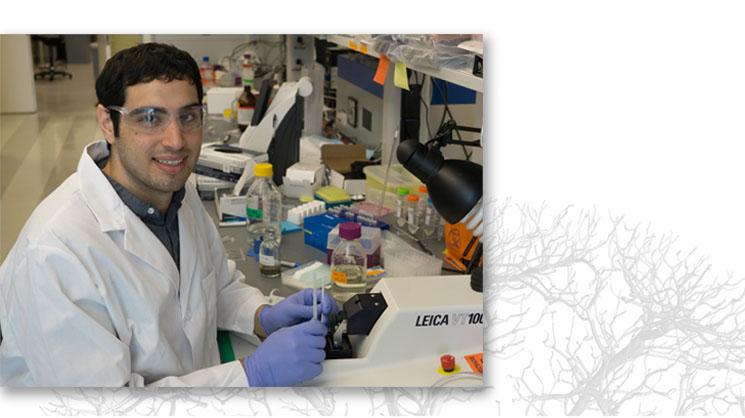 “Recent breakthroughs in biofabrication have made it possible to create engineered tissues with embedded vascular networks. In turn, this has raised the critical question of how oxygen transport through these networks will impact the long-term survival and function of cells in the tissue. For this study, I will use computational tools along with experimental techniques developed in our lab to model and measure how varying levels of oxygen affect cell density and behavior,” said Kinstlinger.

Kinstlinger adds that oxygen transport and diffusion are limiting factors for the survival of cells at high densities as found in native tissues like the liver, which he has chosen as a model tissue type.

“Findings from these models and experiments will teach us fundamentally about how cells respond to oxygen and enable us to better understand the relationship between engineered tissue structure and function.”

The Miller Lab is known for pioneering biofabrication strategies such as hydrogel stereolithography, extrusion-based printing, and selective laser sintering towards the development of vascularized engineered tissues. The low-cost, open-source selective laser sintering system Kinstlinger has developed throughout his doctoral research will allow him to build complicated vascular network structures.

“The new hardware and fabrication techniques that we have developed in the Miller Lab put us in a unique position to study oxygenation in the context of complex vascular networks,” said Kinstlinger.

Kirschstein NRSA fellows are selected after rigorous peer-review and scoring of the proposed work by a panel of established and senior scientists. Students are selected various stages of their education by the National Institutes of Health, which is made up of 27 different institutional components. The program honors the late Kirschstein for her pioneering research, which led to the development of improved, safer polio vaccines.