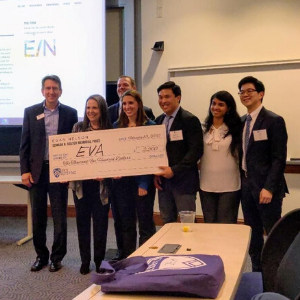 Awarded the prize was EVA (Extra Vascular Access), an ultrasound access needle guide that streamlines vascular access for medical professionals. Forty-two student-led startups from around the world competed in the contest, with teams pitching their projects virtually from June 17 to 19.

EVA is designed as a safe, accurate way to gain venous and arterial access. Some 20 million such procedures are performed annually in the U.S. The device fits all major ultrasound probe heads and immobilizes the needle in the plane of image visualization.

Winning first place in the competition was Aurign from Georgia State University. Their project provides publishing services for recording artists and record labels. They were awarded the $350,000 grand prize from GOOSE Capital and the RG Advisory Partners’ Prize of $25,000.